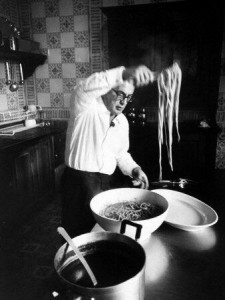 There is something so understated and simply elegant – or perhaps I should say elegantly simple – that it’s difficult not to linger here. For although it’s a restaurant, at Zumpano’s you feel like a guest at the table in Ralph Zumpano’s home. And that’s just the way he wants it. You’ll even find photos of his family on the walls – brilliantly framed, I might add, by Ralph’s sister, a professional at such things. The old black-and-whites from your shoe box never looked so good.

Planted prominently in Burlington’s historic heart, Zumpano’s quietly provides the quintessential dining experience. Whether you’re browsing the Shoppes of Downtown Burlington, pausing for lunch during your hectic weekday grind, or taking the family out for pizza, Zumpano’s provides the perfect backdrop for your meal. It’s atmosphere. It’s ambiance, it’s aura, and it’s on purpose. “I want to provide a place where a family or a group of friends can meet in a relaxing atmosphere” says Ralph. “We’re not about hustle and hurry and loud music. We like to get to know our customers. We want them to come back again and again.” The fact is that since opening its doors in January 2007, the Zumpano’s staff has essentially remained the same. These are people who love people and are committed to offering the best service possible. “Like Cheers,” says Ralph. “Everyone knows you.”…

…So, how is it that, with a background in manufacturing and management, Ralph Zumpano finds himself a restaurateur in beautiful downtown Burlington? “I have always wanted to own a restaurant,” says Ralph. “I have driven through Burlington for years and just loved this building. So here I am.” Actually Ralph’s mother had a huge influence on his cooking expertise. “I was a hungry kid. So, I learned, so I could help her get the meals on the table faster.”

If you’re a long time Burlington resident or frequent visitor, you know the place. Yeah, that’s it. The one on the corner in Burlington’s Downtown Loop. You may have known it in the day’s it was Natale’s and later Infusino’s.

You’ll find Zumpano’s at 180 East Chestnut Street in Burlington. Where you’re welcomed as a guest!

Our Dinning Area will be CLOSED Tonight for a Private Event!
Carry Out and Delivery are available, Call (262)767-0581
Congratulations 🍾 Alec & Kayla!! ...

Due to unusually high call volumes and abundance of people wanting to dine-in, we have shut down our phone services for the evening.
Sorry for the inconvenience, we will be open tomorrow for our normal business hours.
Thanks you all for an amazing weekend 😅 🏃🏻‍♀️ 🏃‍♂️ 🍕 🍝
⭐️ if you currently have an order placed with us, it is on the way! ⭐️ ...